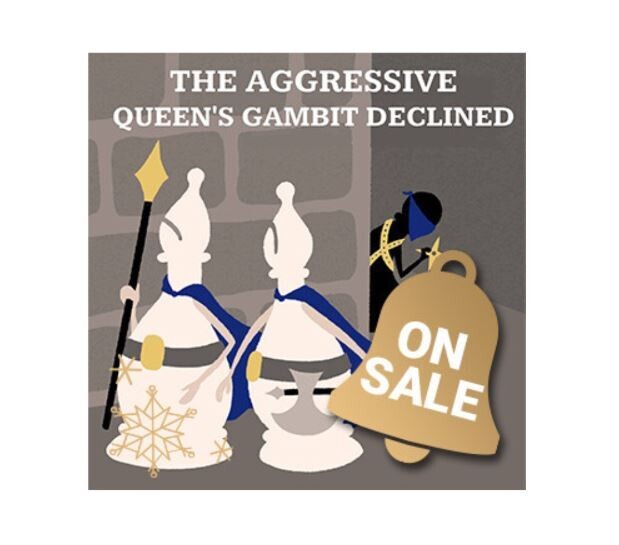 This is an advertisement only, the full text can only be purchased on Chessable.com https://www.chessable.com/the-aggressive-queens-ga...

Tired of playing "not to lose" in the Queen's Gambit Declined?

This energetic secret weapon of NM Bryan Tillis sets the toughest problems for White - and fights for the WIN from the get-go!

When most queen's pawn players encounter the Queen's Gambit Declined (1.d4 d5 2.c4 e6 3.Nc3), they expect to pull ahead in development; enjoy more space; and get a guaranteed advantage.

Imagine their confusion when you play the rare Janowski variation with 3...a6. And in a dozen moves or so, you come out of the opening with active and centralized pieces; ready-to-fire pawn breaks; and clear-cut plans to attack the opponent's position.

This 3...a6 line packs a lot of surprise punch. But more than that, the pawn push sets the stage for Black's combative yet sound (engine-approved) strategies. One misstep is all it takes for the unwary 1.d4 player to get run over.

Add these aggressive Janowski variation plans to your arsenal

🤜🏼 The "dirty dirty" exchange sacrifice where White thinks he's trapping you...only to realize it's the other way around. You'll love bullying the enemy king and pushing his defenders to the edge of the board in this line.

🤜🏼 Force White to endure a queenside cramp or get his pieces in a tangle, trying to get a pawn back. Meanwhile, you pocket the bishop pair and enjoy easy play against White's awkward formation.

🤜🏼 Get an iron-grip on the queenside light-squares and render White's minority attack impotent. Black has all the winning chances here!

The Aggressive Queen's Gambit Declined covers just about any 1.d4 main line and sideline you can think of.

You get a reliable answer against the tried-and-tested 2.c4, as well as less theoretical lines like the London, Veresov, Stonewall, BDG, and even 1.c4 and 1.Nf3 transpositions. All in just 300+ manageable lines.

However, as any student of NM Tillis will tell you:

His courses not only show you the most dynamic and practical ways to play an opening. They also teach you how to play better chess, Janowski variation or not.

The important basic chess principles are seamlessly integrated with this education. The importance of the centre, development with tempo, the initiative, pawn play, exchanges and when to make them...I cannot stress enough how impactful this is for me. - NightsRTrickyForkers

The 17 hours and 50 minutes of video-sync instruction and over 50,000 words of master-level instruction (with handy visual aids) lay down the ideas and plans behind the moves. So you can navigate the game with ease, whether White plays the theory or not.

Arrows are used a plenty, and virtually every position has middlegame plans outlined. You know what to do when the variation stops. - SmithyQ

And with support from NM Tillis, you can get expert answers to your pressing opening questions. Just leave a comment!

I posted a comment, asking if a couple of lines could be added to a chapter. Within a few hours, I had an enormously helpful response from the author, and the lines are added! - GerryJ

Out of 100 games you will play as Black, you will face 1.d4 more than 30 times. Maximize your winning chances and rating gains in every game. AND improve your overall play with NM Bryan Tillis' energetic opening course.

Surprise your opponents with Janowski's 3...a6, and get the fighting positions you LOVE!

Save this product for later
Display prices in: USD

Didn't Find What You Needed Here?

Palm Beach Chess suggests Chess4Less for equipment purchases. Be sure on checking out to use the PBC10 code for a 10% discount.